For you, the concept of having a team of leaders is new. But Irv Rothman disagrees. 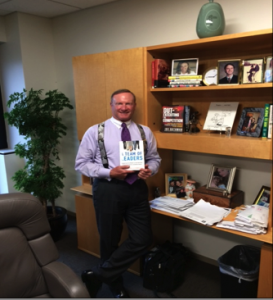 Today, he leads 1500 employees. Those employees are broken down into small, manageable teams.

Not Your ‘of the Month’ Club

Having teams is not some program of the month for Irv. It’s the way he does business.

He believes that people work best when they work within teams. When they manage themselves. When they think and act like they are owners.

Most of his teams are organized around customers, not territories. Within the teams, people have multiple responsibilities. They are cross trained so the team members are able to step up, perform leadership tasks, and help customers.

The teams make their own decisions based on how they will use their resources. How they will achieve their goals, and so on.

This has proven to be a winning formula in every organization that Irv has led.

Sounds crazy, no? Really, it’s not.

A Time to Turn Things Around

It all started in 1986. That’s when Irv first learned about teams of leaders. At the time, he was struggling to start AT&T Capital. Back then he quickly realized that the traditional way of doing business wasn’t producing the results he was seeking.

Paul explained to Irv the power of building a team of leaders. He assured him that this approach can help him turn things around.

The concept made sense to Irv then. Nearly 30 years later, he continues to use it. What’s more, he has the results to back him up.

Irv and many other enlightened leaders have learned that they can’t try to control their employees. They can’t expect them to be engaged and committed. Nor, in that scenario, can they expect them to deliver great customer service. It simply doesn’t work.

People need to feel they are part of something special. That they have the chance to make a difference. They need to have the ability to learn and grow.

Unfortunately, they rarely get the opportunity to achieve such accomplishments in a traditional work design.

Organizations who implement teams of leaders understand the best way to compete and win in the marketplace. It’s by unleashing the brainpower, creativity and energy of their employees. To let them drive positive results to the bottom line.

That is truly a winning formula.

Do you want to join Irv in his success at getting the most out of people?

What level of A Team of Leaders in YOUR Team? CLICK HERE to find out!

Get a deeper knowledge today about how you can put into play a better way to get your business on the path to success. Request a meeting with Paul and Stew.

About Paul Gustafson and Stewart Liff

Paul Gustavson is an organizational design consultant and founder of Organization Planning & Design, Inc. (OPD). He is the co-author of “Running into the Wind”. He can be reached anytime on Twitter and  LinkedIn

Stewart Liff is an HR and visual management expert, and president of Stewart Liff & Associates. He is the author of the new book “98 Opportunities for Improving Management in Government” and co-author of “Seeing is Believing”. He can be reached anytime on Twitter, LinkedIn, or via email.